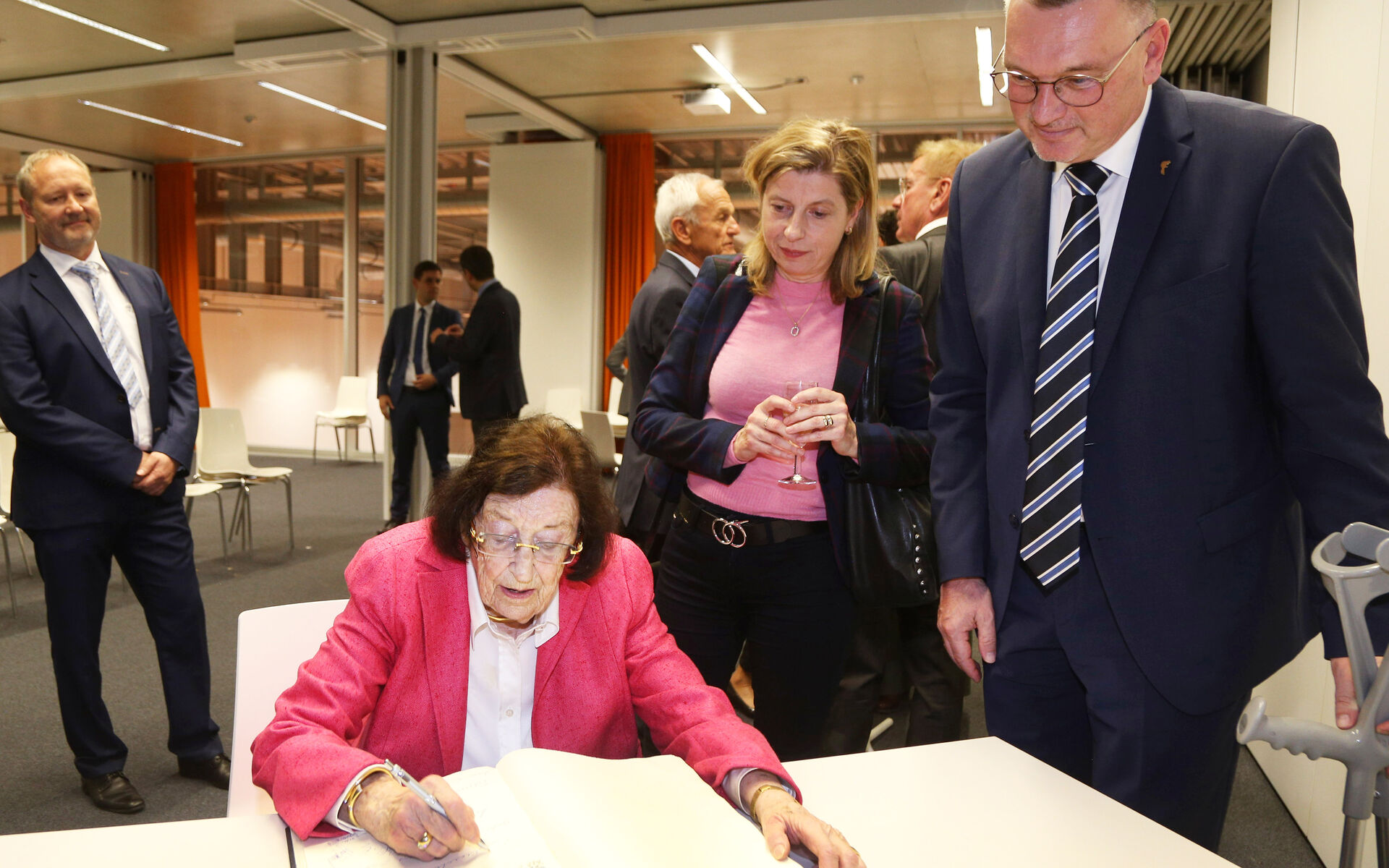 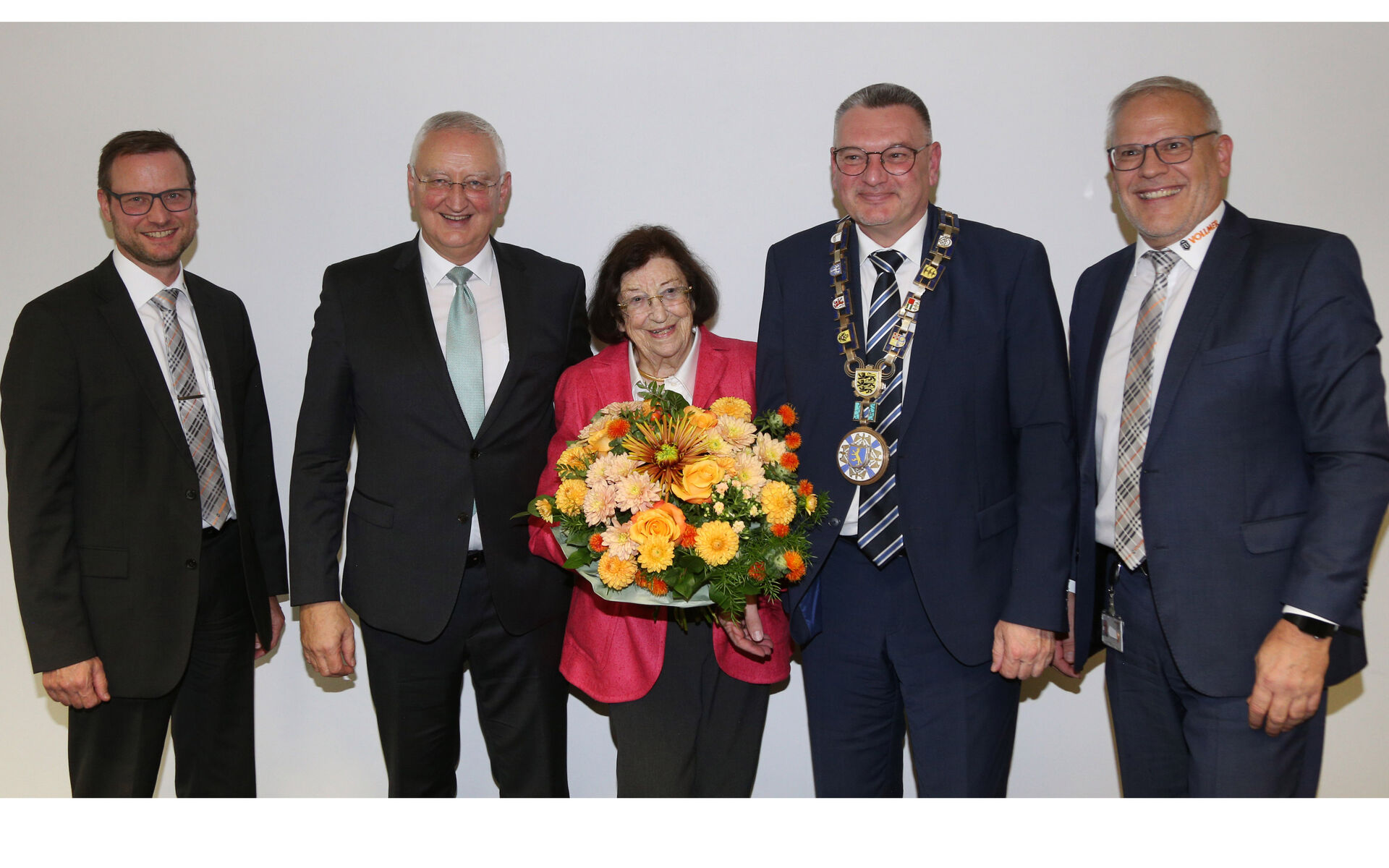 Giving honour to whom honour is due.’ These words certainly apply to Sieglinde Vollmer, who was named an honorary citizen of the town of Biberach an der Riß on the 24th October 2022. The mayor of Biberach, Norbert Zeidler, presented her with the certificate of honour in recognition of her achievements as a businesswoman and committed member of her community. 97-year-old Sieglinde Vollmer shaped the fortunes of the sharpening specialist, VOLLMER, for many years and continues to be a member of the board for the VOLLMER Group, as well as a trustee of the Sieglinde Vollmer Foundation. This foundation supports not-for-profit and charitable organisations in Biberach, among other causes.

"Dear Ms Vollmer, you have dedicated your life to the VOLLMER company and through your foundation, you gift the fruits of the future success of the company to your colleagues, our town and its residents," said Norbert Zeidler, mayor of Biberach. I'm delighted to present to you the highest accolade a community can offer – your honorary citizenship. For the first time in 100 years, the town council in Biberach is honouring an exceptional woman for her extraordinary life achievements."

An entrepreneurial spirit right from birth

Sieglinde Vollmer was born in Biberach in 1924 and to this day is still active as a member of the board for the VOLLMER Group as well as being trustee of the foundation that shares her name. Among the 31 honorary citizens of Biberach, she becomes only the second woman to receive the honour, joining Elisabeth Hecht who received her own honorary citizenship in 1919.

She inherited her spirit of entrepreneurialism at birth, as it was her father, Heinrich Vollmer, who founded the VOLLMER factory in 1909. Today, the Biberach-based machine manufacturer has over 800 employees worldwide and produces grinding machines, eroding machines and laser machines, which are used to sharpen circular saws and rotary tools such as borers and millers. Sieglinde Vollmer, who is affectionately known in Biberach as Fräulein Vollmer, took over the business in 1964 with her brother Udo Vollmer. After her brother resigned from the business in 1987, she took on full responsibility as sole Managing Director.

"Sieglinde Vollmer remains a figurehead for the VOLLMER company to this day." Peter Schneider, the President of the Savings Bank Association in Baden-Württemberg and a former District Administrator in Biberach, praised Sieglinde, saying: "For over three decades, she existed within the male-dominated world of her co-directors in machine building, although she was not a technician, inventor nor economist."

A Biberach native strong in heart and mind

Going beyond her business achievements, Sieglinde Vollmer has also contributed to the cultural and social well-being of the town of Biberach. Thanks to the Sieglinde Vollmer Foundation, which was set up in 2013, not only is the future of the VOLLMER Group secured for years to come, but social and cultural projects can also be supported. The foundation aims to promote and support non-profit and charitable organisations in Biberach, particularly those working in the arts, culture, sport and preservation of local heritage. The foundation supports artistic and vocational education for young people as well as facilitating training in the fields of engineering and economics.

In 2019, the foundation assisted the town of Biberach in acquiring the painting "Der Austellungsbesucher" (The Exhibition Visitor) by Jakob Bräckle, himself from Biberach, for the town museum. Thanks to the Sieglinde Vollmer Foundation, the Biberach music school were able to buy instruments, some of which were used at the honorary citizenship ceremony. To encourage the education of young people, the Sieglinde Vollmer Award is awarded every 2 years. The prize is awarded to young people who have gone above and beyond to complete an extra curricular STEM project, i.e. in the Science, Technology, Engineering and Mathematics fields.

"I'm very pleased to be receiving honorary citizenship in Biberach. It is not just an honour for me, but also for all those who work at VOLLMER and who feel interconnected with our family business," said Sieglinde Vollmer. "It is my hope that the coming generations continue my father's vision and spirit of innovation, and of course, that I am able to enjoy my honorary citizenship for a long while yet."