Marking its 60th anniversary, the Sharp Tool Company in Hudson, MA is a company that throughout its history has achieved a number of milestones, and in this landmark year the company has purchased five circular saw blade grinding machines from VOLLMER.

Founded by Walter Morette, a truck driver that was the owner of a haulage company and also an ex-military veteran, the Sharp Tool Company started out as a saw blade servicing company. Throughout its history, the company has evolved to offer an unparalleled range of services - now claiming to be the USA's largest carbide tip saw distributor as well as one of the most prominent saw blade, bandsaw, knife tool and blade manufacturing and servicing businesses in New England.

Back in 1959, Walter Morette was persuaded by a friend to invest $40,000 in a saw blade servicing company. The business progressed at a steady pace, but it was the company's first encounter with VOLLMER that helped to drive the business forward. Pre-dating the inception of VOLLMER of America, Walter purchased the first VOLLMER machine flown into the US in 1969 - not being one to wait for the slow boat.

At that time, the Sharp Tool Company was operating tool and cutter grinders, but it was the arrival of the VOLLMER Finimat that provided the ability to conduct face and top grinding of circular saw blades automatically. This transformed the business from a service company to a full-blown manufacturer of saw blades. The machine proved such a success that another two rapidly followed and a 50-year relationship with VOLLMER was born.

Now, as the nation has just celebrated the anniversary of the historic moon landing, the Sharp Tool Company has celebrated its 50th year of working with VOLLMER with a stratospheric investment in the next generation of VOLLMER technology. The US$1m investment in VOLLMER technology will now blast the Hudson business into the future of saw blade manufacturing and service.

The journey to success
The modern face of the business sees Sharp Tool manufacture upward of 700 saw blades every week with over 4,000 continuously on order and an additional 1000 HSS and carbide tipped saw blades being serviced every seven days. The company also supplies band saw blades and following the acquisition of a flat knife business, Sharp Tool Co also manufactures and grinds various flat knives ranging from granulator knives, chipper knives and trimmer knives to paper, ice and brush chipper knives, shear blades and much more. As if all this wasn't a demonstration of diversity, flexibility and service offerings for its end users, Sharp Tool Co also imports upward of 3 million pieces of carbide each month with another 10 million pieces in-stock. The unfathomable level of production caters for the primary and secondary wood industry that covers everything from the lumber sector through to the furniture manufacturers whilst the capabilities of the VOLLMER machines also give the company a strong foothold in the metal and plastic manufacturing sectors.

But all this didn't arrive by good fortune. Company President Paul Morette who purchased the company from his father Walter in 1982, also inherited his father's relentless work ethic and passion for the business - something that the third generation of the business has already learnt, as Mike Morette, the grandson of the company founder will testify. Paul and Mike now run the day to day operations at Sharp Tool.

But as any successful business owner will acknowledge, achieving success stretches far beyond hard work; and in the case of the Sharp Tool Co, they have had VOLLMER in their corner for half a century to help them on their journey.

The path to innovation
The investment in the first VOLLMER Finimat machines half a century ago certainly paid dividends, as the robust build quality of the Finimat's stretched their working life long into the 1980's. In 1982, when Paul took the reins of the business, the company had just five staff; this number has now grown to over 40 employees that operate out of a 22,500 square foot factory filled with the latest grinding and automation technology.

Like the VOLLMER Finimat machines that took the Sharp Tool Co from a service to Production Company in the 60's, it was the arrival of four VOLLMER CHC20 machines in the late 1980's that gave the business the platform and impetus to grow...rapidly. The VOLLMER CHC20 face and topper grinding machines were a step change that enabled the business to grow aggressively. The arrival of automated production from the VOLLMER CHC machines streamlined operations and enabled the company to grow rapidly without excessive labor investment. The significantly faster processing speeds meant that Sharp Tool Co could also reduce its lead times and enhance its reputation for impeccable quality - both bedrock philosophies of the modern-day business.

The four CHC20 machines were followed by a VOLLMER CHC25 and through the 80s and 90s, the ambitions to push the boundaries of the machines noted Sharp Tool making modifications to the saw blade sleeves on the CHC machines to extend the processing range beyond the standard 3.5 to 32 inches to achieve 2 to 52 inches, giving the manufacturer the facility to extend its saw blade diameter range and push into the pallet saw segment.

The changing Industry
Adding to the CHC machines shortly after the millennium, Sharp Tool Co added an Akemat F10 side grinding machine in 2006.  However, like the Finimat machines before them, the CHC machines were reaching the end of their service life. This coincided with a paradigm shift in the landscape of the circular saw blade industry in the US. As Company President, Mr. Paul Morette recalls: "Over the last five years the saw blade industry has changed beyond recognition. Big investment groups are snapping up smaller family owned saw blade businesses and creating huge 'group' businesses. Run by investors and accountants with no expertise in the industry, these guys are cashing-in by reducing inventory and allowing highly skilled staff and business owners to exit the industry. The result is increased lead times, reduced service and investment, plus the loss of business relationships that date back generations."

As Company Vice President Mike Morette explains "While we've had our offers to sell our business, our focus is always on our customers. The consolidation strategy by conglomerates has resulted in huge growth for our business with more than 10%+ year-on-year growth over the last four years. This growth is accelerating as a result of competitor consolidation strategies. Almost 90% of our production is made-to-order special saw blades and while competitors are losing focus on this segment, our investment in new VOLLMER machines will consolidate our position and support our future growth."

With consolidation resulting in long-term saw blade consumers losing their valued supply chain, Sharp Tool Co visited the GrindTec 2018 exhibition with an aim to invest in new technology and capitalize upon the situation. The result was an immediate recognition that the new VOLLMER CHX1300 servo driven grinding center and the CHX840HS with automatic blade loading would be the perfect fit for Sharp Tool Co. The VOLLMER CHX1300 and CHX840HS were ordered shortly after the event for face and top grinding in a single set-up. The logic behind the investment was for the most popular blade sizes up to 840mm diameter (33 inch) to be processed in a single set-up on an automated un-manned basis whilst the CHX1300 would provide much needed capacity for saw blades up to 1300mm (51 inch).

Within a matter of weeks, the company added to its order with an additional CHX840, which was followed in October with an order for the CHF1300 side grinding machine to complement the CHX1300. With the CHX1300 and CHX840HS hitting the shop floor in January 2019 with an immediate impact, the company ordered its fifth machine, another CHX840 in April 2019, which was delivered in the summer. The second CHX840 landed in March with the CHF1300 rapidly following in June 2019.

The investment benefits
Even before all the machine orders land in the workshop, the Sharp Tool Co has witnessed a multitude of benefits that are far ranging. As Mr. Paul Morette continues: "The instant benefit of the machines is huge. The surface finishes and the precision on our saw blades is much better than before. This will improve the service life of our products for our customers. Added to this, by completing face and top grinding in a single set-up, we are improving our consistency and overall quality. This is an investment we have made to benefit our customers."

For sure there must be benefits for the Sharp Tool Co, too. “With the new machines, we are now doing face and top grinding in a single set-up. This has eliminated secondary set-ups and it is saving us the equivalent of two employees a year, maybe US$100,000 a year labor saving, as these guys don't have to constantly run two machines. It also saves the guys from trying to load heavy 52-inch blades twice from one machine to the next."

From a productivity perspective, the new VOLLMER machines are at least 40% faster than the previous VOLLMER CHC20 machines they have replaced. Adding in the elimination of multiple set-ups and the Sharp Tool Co is realizing throughput improvements upward of 50%+. The benefit to both the industry leading saw manufacturer and its customers is that lead times will be reduced considerably as the business moves forward. "Our re-grind service operates a weekly turnaround service with eight different routes whereas the design to manufacture of new saw blades can be up to 6-weeks, a lead-time largely governed by external factors such as material supply. With the new VOLLMERs, we will take up to 2 weeks out of this lead time, another huge bonus for our customers. We are extremely pleased with the machines and the service from VOLLMER,” concludes the Company President. 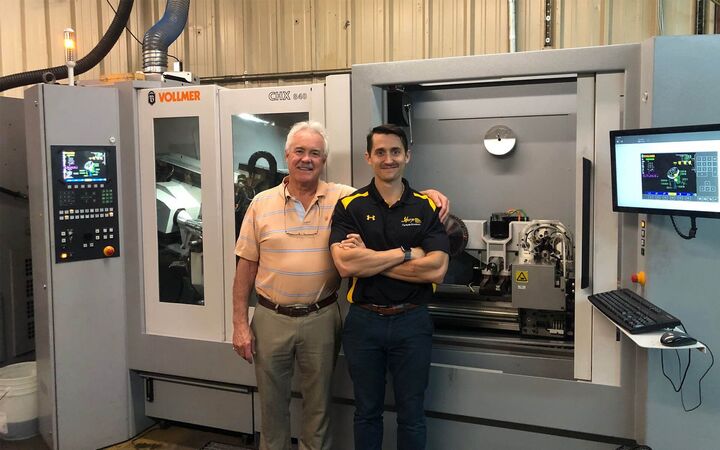 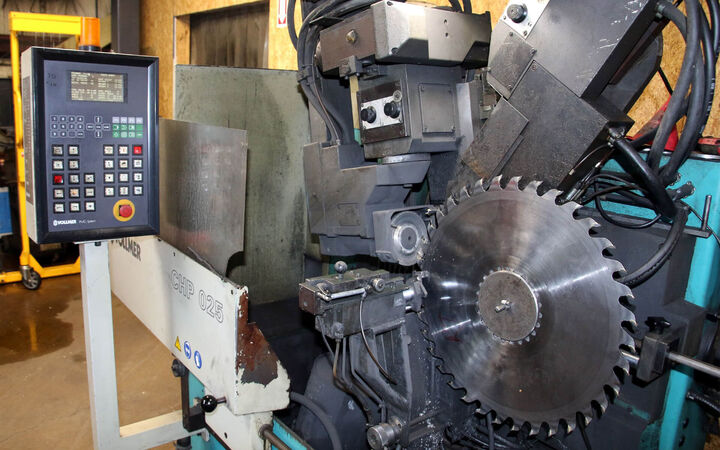