The name of the US company Great Lakes Custom Tool Manufacturing (GLCT) says it all: GLCT produces special tools and is situated at Lake Michigan, one of North America's five Great Lakes. In order to machine tools and circular saws that are tipped with carbide or PCD (polycrystalline diamond), the toolmaker uses 19 VOLLMER machines in total. Recently, the Swabian sharpening specialist supplied GLCT with a VPulse 500 wire erosion machine and a VGrind 360 tool grinding machine, amongst others.

Just a stone's throw from Lake Michigan is the small town of Peshtigo in the US state of Wisconsin, which has almost 4000 inhabitants. A good 80 of them work at the toolmaker Great Lakes Custom Tool Manufacturing (GLCT), a company founded more than 40 years ago by Russ Martin. He is still guiding the fortunes of GLCT today together with his son Ray Martin. The Great Lakes toolmaker has been developing custom tools and circular saws tipped with carbide or PCD since 1979. In its early days, GLCT primarily supplied the woodworking industry, and has also increasingly supplied companies in the metalworking industry since 2004.

"We have developed from a local sharpening service into an international manufacturer of special tools for wood- and metalworking," says GLCT CEO Ray Martin. "Our combination of products, services and support, along with a company culture of investment and innovation, is the reason behind our success both on the American market and globally."

In the manufacturing halls of GLCT, there are now more than 50 CNC-controlled machines and a wide variety of manual machines, as well as instruments from testing and measurement technology. The toolmaker uses this machinery to develop around 70,000 products for sawing and machining wood, metal or composite materials. Since its foundation, the US toolmaker has put its trust in the sharpening expertise of VOLLMER, the Swabian machine manufacturer from Biberach. It is primarily VOLLMER erosion machines that GLCT uses to machine its PCD-tipped circular saws and cutting tools. Since the company has been focusing its attention on the PCD-tools market, a new VOLLMER machine has been delivered to Lake Michigan almost every year – including numerous erosion machines with automations, such as the QXD 250 with a loading system so that it can be used around the clock without human intervention. When GLCT expanded its business premises to almost 10,000 square metres in 2018, five new VOLLMER machines arrived at the factory, including a VPulse 500 wire erosion machine with an external loading system for up to 16 tools. The successor to the QWD range can sharpen significantly more quickly than its predecessor thanks to a new type of generator technology for PCD cutting edges.

"Thanks to the VPulse generator, the new machine is at least 20 per cent more productive than our previous QWD machines", says Ray Martin. "What's more, the surface quality of the cutting tools is better than ever, and the VPulse 500 has the latest VOLLMER programming system, which offers an intuitive user interface. This means that we no longer save production time, but also avoid machining errors."

Even in 2020, a year when COVID-19 was wreaking havoc across the world, a new VOLLMER machine reached Lake Michigan: A QR 270 disc erosion machine was delivered, which can be used to sharpen the tooth tops of PCD-tipped circular saw blades. GLCT now has a total of 19 VOLLMER sharpening machines to enable tool production, repair and resharpening to run seamlessly.

At GLCT, VOLLMER is the first port of call not only for machining PCD-tipped tools and circular saw blades, but also for tool grinding. GLCT acquired a VGrind 360 grinding machine for its subsidiary AAA Precision Tool & Cutter Grinding LLC, which is 2700 kilometres west of the Great Lakes, in Orofino in the US state of Idaho. Using both its vertical spindles, the VGrind 360 can machine carbide tools more quickly, while AAA Precision Tool could also significantly increase the surface quality of its tools.

"The North American market is very important for VOLLMER. We first increased our presence in the US by building a new company building in Pennsylvania in 2019, which was completed in June 2020" says Jürgen Hauger, CEO of the VOLLMER Group. "The new building enables us to further expand our growth throughout North America, as well as offer our customers more services and showcase more innovation." 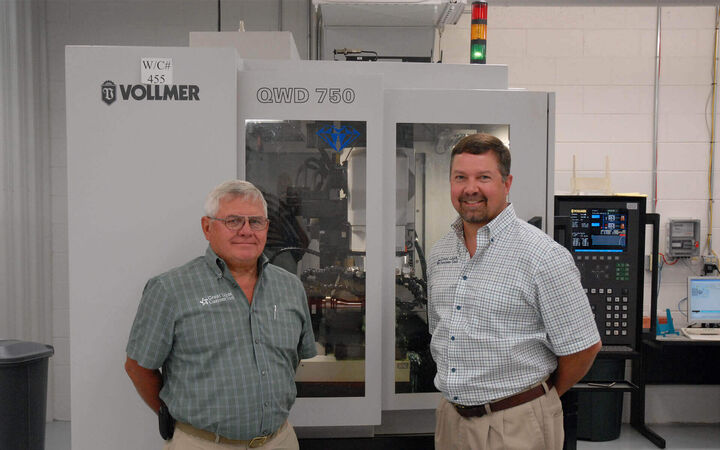 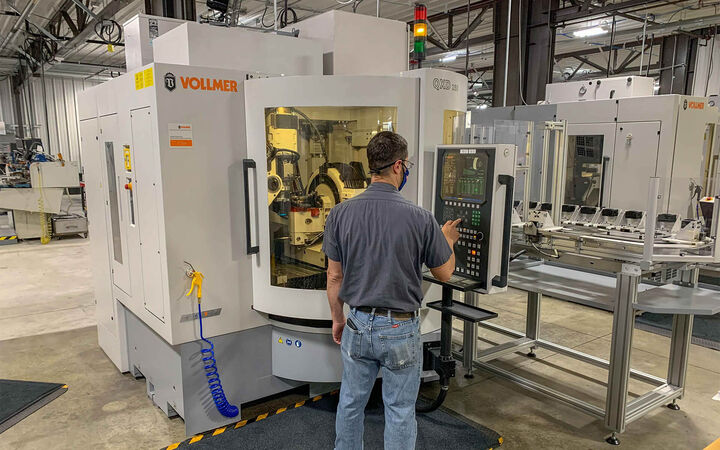