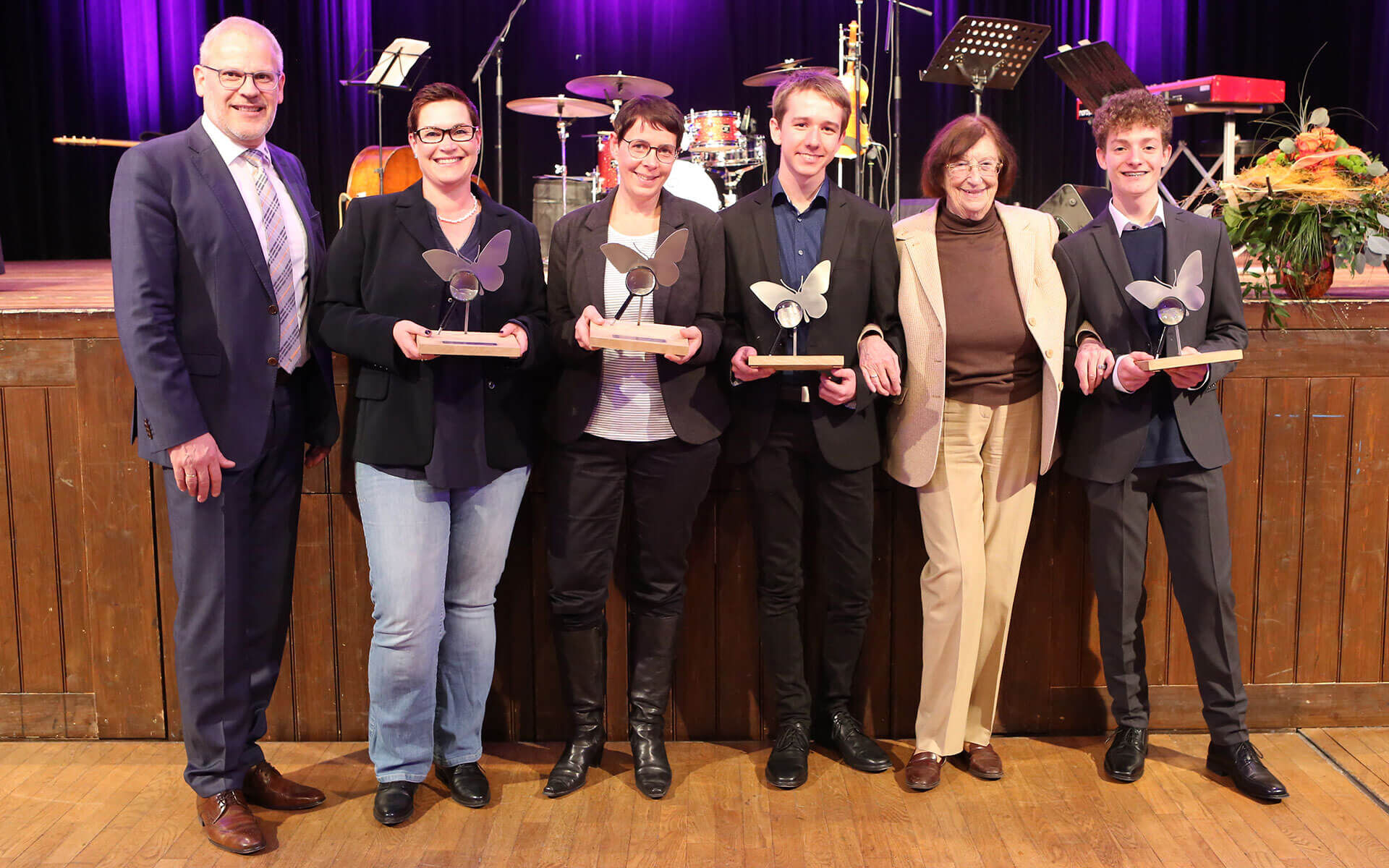 The award winners of the 2019 Sieglinde Vollmer Award have been decided: Rudolf Erdmann Mey from Mittelbiberach and Benno Hölz from Ochsenhausen receive the "Award for Young People". Both individuals showed a sustained commitment outside the classroom in the area of Science, Technology, Engineering and Mathematics (STEM). The "Award for Initiatives" goes to the project MACH MI(N)T from Biberach. It is awarded to clubs or associations, in which young researchers can develop their STEM competences and also experiment, discover and learn after school. The Sieglinde Vollmer Foundation from Biberach awards the Sieglinde Vollmer awards for the first time in 2019.

"The aim of the Sieglinde Vollmer Award is to strengthen the STEM commitment in the region", says Sieglinde Vollmer, patron of the foundation and daughter of Heinrich Vollmer, who founded the Biberach-based company in 1909. "With the Award for Young People, it is not a brilliant individual achievement or an excellent product that is awarded. The person is awarded, not the idea. In order to find these young people, last year we called on schools and initiatives in the Biberach district to nominate young people. With the Award for Initiatives, we want to support organisations who allow young people to develop their enthusiasm for STEM. A total of twelve nominations for young people as well as three for initiatives were submitted and examined by our jurors."

Rudolf Erdmann Mey from Mittelbiberach and Benno Hölz from Ochsenhausen receive the "Award for Young People", which is worth EUR 2,500. Both impressed the jurors with a comprehensive package of healthy ambition, commitment, thirst for knowledge and their open-minded approach.

As an example of his inventiveness, Rudolf Erdmann Mey presented his self-built vehicle, which is able to move autonomously with the help of sensors and microcontrollers. The 14-year old has also been active in the student research centre for the last five years and is an enthusiastic member of the Science Club of the Dollinger Realschule (secondary school). In 2016 he was delighted with the victory of the Lego Robotics Academy.

Benno Hölz has already taken part in five regional and four national competitions of Jugend Forscht (German youth science competition) and has won the regional competition four times and the national competition on one occasion. The 18-year-old student is actively involved in promoting young STEM researchers at his former school, Gymnasium Ochsenhausen, and supervises projects for the student research centre. He is currently researching connections between the colour of the sunset and the weather.

"The Sieglinde Vollmer Award is an excellent thing", says Benno Hölz. "Especially that the jury not only awards individual successes, but looks at everything that one has done over the years. The jury meeting at VOLLMER was also fun because we obtained a tremendous insight into the company."

The project MACH MI(N)T received the EUR 4,000 "Award for Initiatives". The cooperation between Stadtteilhaus Gaisental and the Biberach University of Applied Sciences has been offering free workshops since 2018 to participants from six to eighteen years old with the project "MACH MI(N)T – Children's Uni and Researcher Academy". The aim is to build the relatively new cooperation on a long-term and sustainable basis, acquire more partners for workshops and establish MACH MI(N)T as an integral part of the Biberach annual calendar. The participants are introduced to the STEM world using games and hands-on activities. They not only receive a Children's Uni ID, but can also fiddle about and experiment without any pressure.

The jury of the Sieglinde Vollmer Award was made up of three representatives of the VOLLMER plants, including CEO Dr. Stefan Brand, Head of Development Manfred Sägmüller and HR Manager Hans Wahl. In the category for young people they were supported by experts from the Biberach University of Applied Sciences: Prof. Dr. Jens Winter (Vice Chancellor for Lifelong Learning and International Affairs, lecturer in mathematics), as well as Prof. Volker Wachenfeld (lecturer in electrical systems), complemented the jury with their scientific know-how. Both awards were presented on 19 February 2019 at a ceremony in Biberach with international guests from the VOLLMER plants.

The next Sieglinde Vollmer Award will be presented in 2021. More information can be found online at: www.sieglinde-vollmer-preis.de.